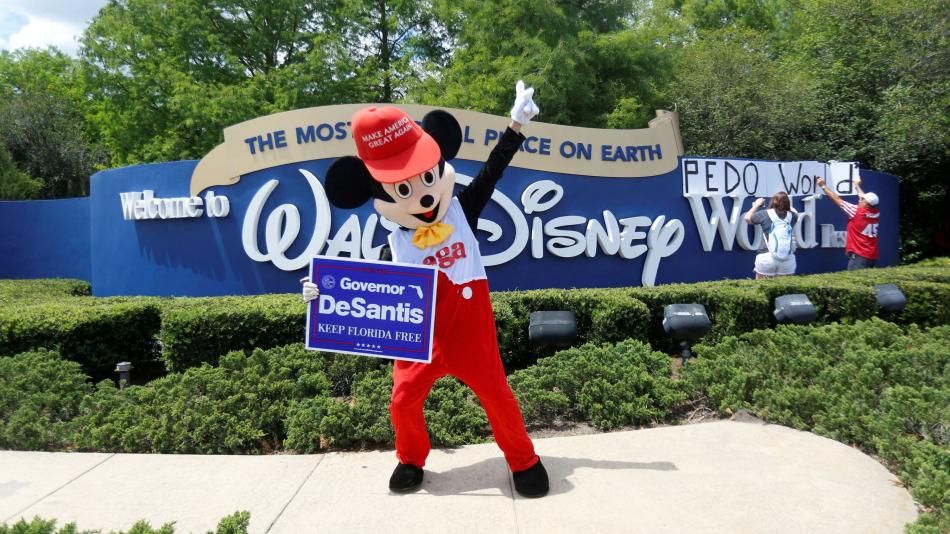 REUTERS/Octavio Jones/File Photo
Florida’s Republican politicians want to remind Disney that it’s "a guest" in the state.
From our Obsession
Rethinking cities
Cities have to accommodate more people, lessen their environmental footprint, and become more equitable.
By Camille Squires
Cities reporter
Published April 23, 2022Last updated April 26, 2022
Florida’s state legislature passed a bill Thursday (April 21) revoking The Walt Disney Company’s control over its own self-governed special district within the state. On Friday, governor Ron DeSantis signed the bill, putting an end to the privileges Disney has enjoyed for 55 years exerting unparalleled control over the land its theme park sits on from approving construction codes to the right to build a nuclear plant.

What is Disney’s special status in Florida?

The bill sets in motion a process to dissolve the Reedy Creek Improvement District, a 25,000-acre parcel encompassing Disney World and other theme parks, and turn control over to neighboring Orange and Osceola counties. In addition to handling municipal responsibilities like water management, water, and emergency fire services, the counties would also assume $1 billion in debt from Reedy Creek’s operating budget, up to $1,000 per taxpayer.
At a press conference Friday for the signing of the bill, DeSantis assured that municipal expenses for the area would not fall on Florida taxpayers. "Don’t let anyone tell you that somehow Disney’s going to get a tax cut out of this," he said. "They’re going to pay more taxes as a result."
With the passage of this law, DeSantis, and by extension, the Republican party is sending the strongest signal yet to corporate America, historically among its most consistent supporters and source of campaign cash for the GOP, that culture war politics will trump business as usual in today’s hyper-partisan nation.

Why is DeSantis fighting with Disney?

On March 28, the Florida legislature passed a law limiting what public school instructors could teach about sexual orientation and gender identity. The law states classroom instruction for students in kindergarten through third grade cannot include content about gender or sexual orientation "that is not age-appropriate or developmentally appropriate for students in accordance with state standards."
Opponents of the bill, dubbed the "Don’t Say Gay" law by critics, said the vaguely worded statute will hurt LGBTQ students and their families by marginalizing those groups and allow any parent to sue over legitimate educational material they dislike. They called on Disney, one of the largest employers in the state, to speak out against it and end all political donations to Florida politicians backing the bill.
Faced with a public outcry, including a walkout among Disney employees around the country, Disney leadership responded. In early March, Disney CEO Bob Chapek issued a statement publicly condemning the bill and apologizing for his previous refusal to take a public stand against the bill after it was passed in the state House of Representatives. "It is clear that this is not just an issue about a bill in Florida, but instead yet another challenge to basic human rights," said Chapek. "You needed me to be a stronger ally in the fight for equal rights and I let you down. I am sorry."
After DeSantis signed the bill into law on March 28, Disney issued another statement vowing to help get it repealed. By April 19, Republican state senator Jennifer Bradley had introduced a bill to dissolve six of the state’s special districts, including Disney World’s, devolving authority over the area to Orange and Oceola counties, the two local governments the area spans.
Several Florida politicians and other critics called the move an act of retribution by Republican governor DeSantis and his party for The Walt Disney Company’s opposition to the bill. Democratic state senator Lori Berman likened the debacle to "political theater," saying the Republicans in the legislature were doing the bidding of the governor.
A spokesperson for Gov. DeSantis told Bloomberg the move wasn’t retaliatory, but rather designed to create a "fairer environment for all companies to do business." But DeSantis himself seemed to contradict that in his remarks before signing the bill into law. "You’re a corporation based in Burbank, California," DeSantis said about Disney. "And you’re going to marshall your economic power to attack the parents of my state? We view that as a provocation, and we’re gonna fight back against that."
The Walt Disney Company so far has not made a public comment on the special district removal. The law is set to dissolve the Reedy Creek special district effective June 1, 2023, but it’s unlikely that would happen without a lengthy legal battle first.
comments powered by Disqus